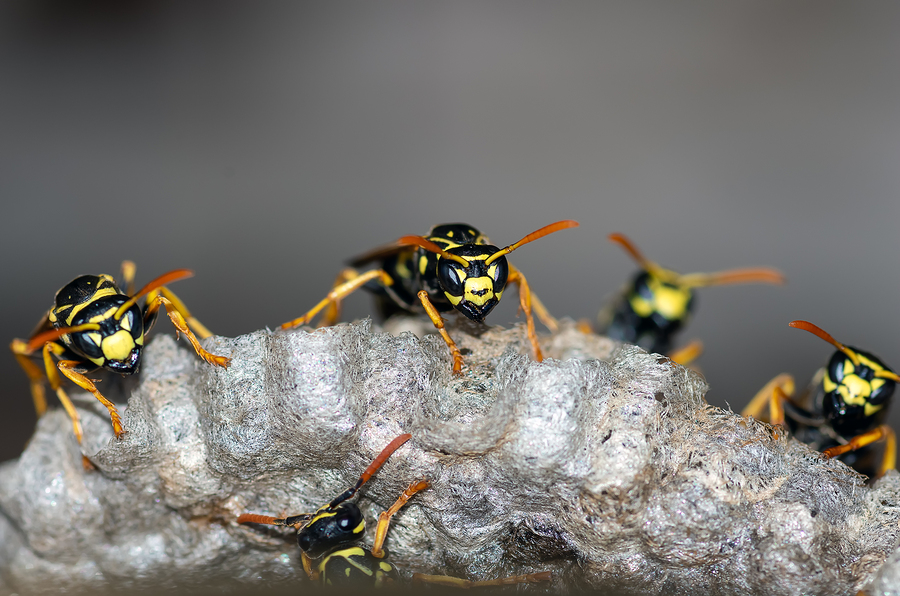 Whether it’s a bee or wasp that is threatening you while you’re outdoors it’s a little scary when one of these winged insects flies near. There are species of wasps, bees and hornets that are more dangerous and painful than others though.

The biggest differences are in their appearance, color and body texture. Bumblebees and honey bees are fuzzy while wasps and hornets, including yellowjacket wasps, are smooth. Wasps can be yellow and black or entirely black while bees have colors and stripes on their abdomen.

The abdomen and thorax of a bee is round and they have flat, wide legs. The body of the honey bee has three segments of thorax, each with a pair of legs. The head of the honey bee consists of the eyes, antennae and feeding structures. Most species of bees have short, thick bodies covered with hair. A tiny waist connects the thorax and abdomen.

There are more than 100,000 species of wasps, and many resemble bees in appearance. In general, wasps have very little hair, bright colors and a longer, very narrow waist (the junction between the thorax and abdomen). Wasp’s legs tend to hang down during flight whereas a bee’s legs don’t. Wasps are much more aggressive than bees and far more likely to sting.

Hornets are actually a type of wasp. One way to distinguish hornets from other wasps is that the hornets have a thick body and lack the distinctive thin waist generally found in other wasps. They are in the same subfamily as yellowjackets, but are larger and often black and white, rather than the typical black and yellow color of the smaller yellowjacket species. A common new species called European hornets have started showing up in North America, and can even be larger than carpenter bees.

Difference between a bee sting and a wasp sting

When talking about the differences between a bee sting and a wasp sting it’s important to note that some are more aggressive when they sting and some are more passive. There are also some major differences in the way they sting. When a bee stings it is “all or nothing” as it loses its stinger and injects a relatively large amount of venom, typically about 50 micrograms. A wasp is different in that it retains its stinger, and injects from 2 to 15 micrograms of venom but it can do this multiple times. Chemically there are differences between the venoms, though the effects are similar.

There are major differences between wasps, hornets and bees in regards to where they make their homes and the structures they build. They are all found on every continent except for Antarctica.

Wasps will construct their nests from a pulp-like secretion that they make by chewing wood fibers and mixing it with saliva. Yellowjackets and hornets will build a series of combs one on top of another and surround them with an envelope of pulpy layers. Yellowjackets like to build theirs below the ground in holes they "borrow" from animals or in hollow trees or tree stumps, shrubs, inside the walls of structures, and underneath the eaves of buildings. Hornets tend to make their papery looking nests high up in trees or along the side of a building.

Honey bees, famous for making honeycomb designed nests, make a string of vertical combs out of wax. Though most of their nests today come from humans in the form of prefabricated hives they can also nest in tree cavities. Bumblebees often nest in empty burrows and openings in buildings. Most bees excavate their nest tunnels in sunny patches of bare ground, while others seek out abandoned beetle burrows in dead tree trunks or branches.

Bees serve as useful pollinators and honey makers, whereas wasps are predators and are typically an unuseful pest in nature. If you suspect an infestation has occurred whether it’s bees, wasps or another pest contact Eagle Pest Services for all of your pest control needs.