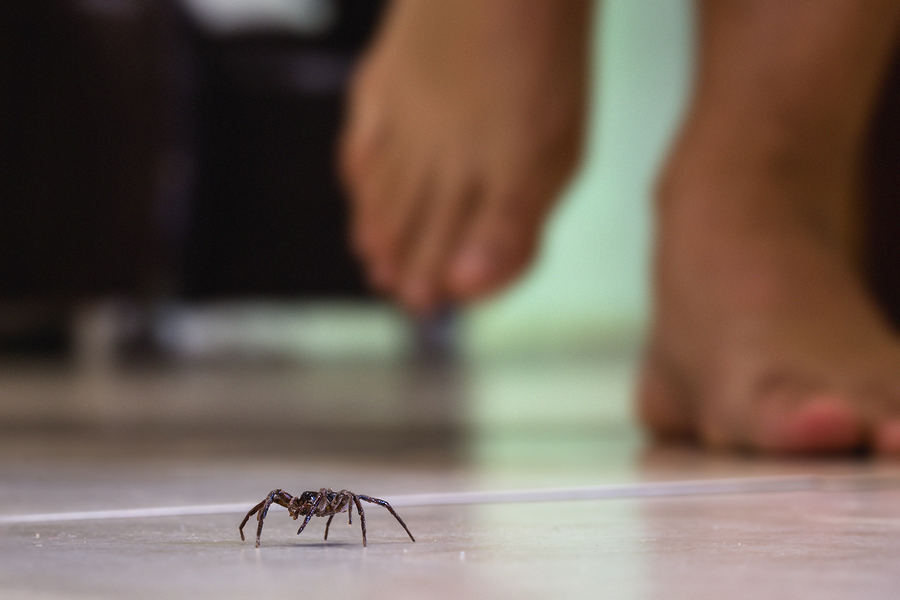 For many of us, seeing any type of spider indoors can cause alarm. It’s good to be familiar with the common types of household spiders and to know whether they pose a health risk. They aren’t all cause for panic. Some can actually be beneficial in controlling other insects. You can identify some spiders by web patterns but it’s much easier to identify most spiders by color, shape, and markings.

This spider is a common type known for its webs. You’ve likely seen evidence of this species in your home. Their “unorganized” webs often referred to as cobwebs are typically seen in basements, closets and crawl spaces.

Although harmless, these spiders are considered a nuisance because of their messy webs that look unsightly. They’re actually part of a group known as cobweb spiders which also includes long-bodied cellar spiders.

Though often mistaken for daddy longlegs because of its long spindly legs, the long-bodied cellar spider is not the same thing as a daddy longlegs. These spiders do not pose any health risk, though they also leave very unsightly cobwebs in homes.

Unlike some species that make new webs to replace old ones, cellar spiders will continue to layer additional, new webs on top of their old ones. As a result, the webs can build up excessively in a somewhat short period of time, creating a noticeable cobweb appearance in the home and becoming full of captured bugs and dust.

The brown recluse is part of the brown spider family. You can find them indoors in basements, attics, crawl spaces, between walls, furniture, and even in clothing. They’re often carried into the home via boxes and bags. This spider is venomous and does pose a health risk.

The brown recluse’s venom has a cytotoxin, meaning it can affect the tissue at the bite site. Medical treatment is needed, as dangerous reactions from the venom can occur. These may include but are not limited to chills, fever, rash, pain, and nausea.

Jumping spiders tend to hunt for prey during the day. You may spot them on the inside of a window, screen door, along a wall, or any surface exposed to daylight. They move by jumping quickly, as their name suggests.

The jumping spider’s bite is similar to a bee sting, but not usually severe unless the victim of this bite experiences an allergic reaction. Children or anyone allergic to spider bites may experience more severe reactions, which can differ from person to person.

Wolf spiders are larger than many of the other common household spiders. They may enter your home through foundation cracks, windows, or come in through an attached garage. Considered a hunting spider, they eat many pesty insects.

Harmless to humans, the brown-colored wolf spiders sometimes are mistaken for the brown recluse. Though there are differences in appearance as discussed here. However, anyone allergic to spider bites may suffer a reaction that could require medical treatment even if a spider isn’t venomous.

If you have a spider infestation or any other type of pest problem contact our professionals at Eagle Pest Services to schedule an inspection.