Most Dangerous Spiders in VA to Watch Out For 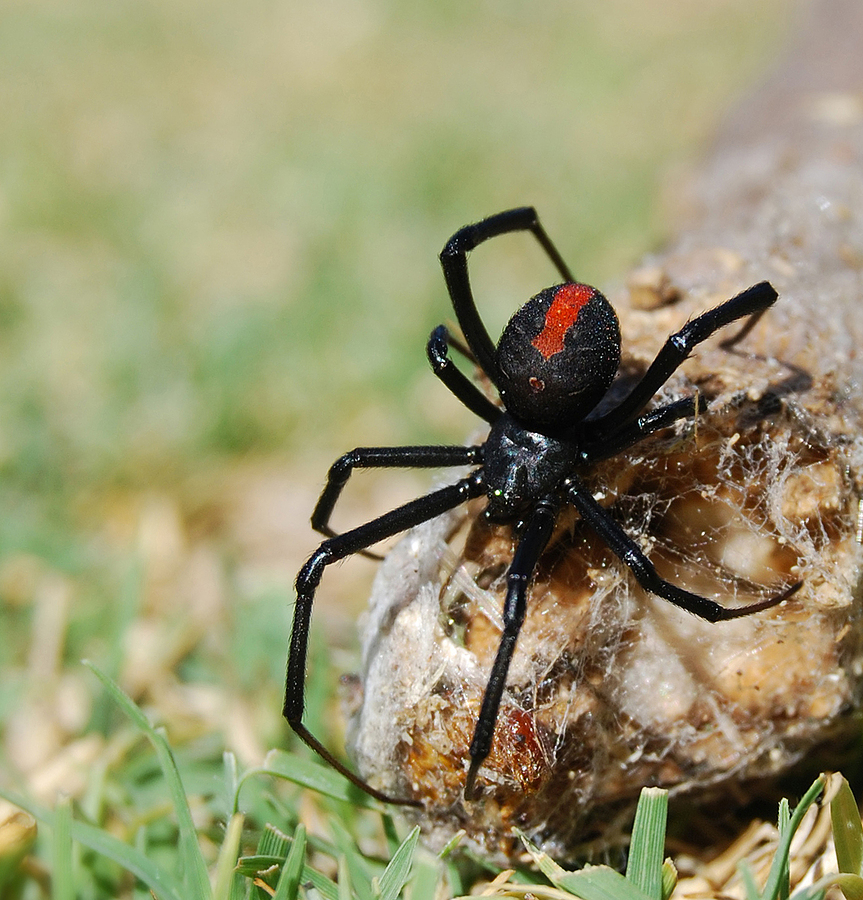 Spiders are both feared and loved, considered friend and foe. On the one hand, they get rid of pesky bugs like mosquitos and flies, on the other hand, many are venomous. Some people have a fear of spiders for this reason - even though science says that only about one percent of spider species are actually dangerous to humans.

Seeing individual spiders and their nests of eggs can happen quite often. You should be able to identify common dangerous spiders that live in VA just in case.

One of the most commonly known venomous spiders in the United States, black widows are between 1 and 1.5 inches long with a distinct red marking on the abdomen. In southern VA, you may encounter a black widow with a red hourglass shape on its bottom, but in the north, the spider abdomen is broken into two parts, which may look like bright red dots or dashes on its body.

This spider is not native to Virginia, with only a few yearly reported sightings. It is more common in the south of the state but can end up anywhere as these pests can come into the state through shipments and construction materials. It is tiny, about 0.5 inches, and brown, so it easily blends into its surroundings and goes unseen. A bite may come on suddenly, and be really painful. However, they are rarely fatal and can be treated with a trip to the ER.

What To Do When Bitten by a Venomous Spider in VA

For those of you with fears of spiders, you can rest easy. North America is home to thousands of species of spiders, and very few are dangerous to humans. The two mentioned above are the only ones you have to watch out for in your home and yard that may require medical attention. If you get bit by a black widow or brown recluse, seek medical attention, and bring the spider with you (if you can) sealed in a jar or other container. Most of the time, a bite from a black widow or brown recluse isn’t fatal, but has some uncomfortable symptoms. If you’re not sure what kind of spider bit you, but are experiencing severe pain, burning, swelling, or see fang marks, you should get to a doctor or ER.

Most Spiders in VA are Not Dangerous

Almost all spiders have some sort of venom, however, it rarely affects humans in a serious way. A spider bite from one of Virginia’s many native species may swell and itch, resembling a mosquito bite that takes a few days to go away. Unless you’re experiencing serious symptoms, you don’t have to worry about most spider bites - they will go away on their own! You can speed up recovery by cleaning the area with alcohol.

Although these bites aren’t serious, the non-dangerous spiders can still become a nuisance, especially if they set up a nest on your property. Some other common species of spiders in VA are:

What to Do If You Have a Spider Infestation

If you’ve spotted one or more spiders, venomous or not, in or around your home, you may want to consider professional pest control from Eagle Pest Services. We know how to find and identify these pests, and remove them from your home so you don’t have to worry about your children and pets being bitten. Call us at 1-888-616-8739 or contact us online to schedule an inspection today.

Check out our Home Health Packages

“Eagle answered our questions professionally. Technicians showed up on time and were courteous and cheerful. The price for heat treatment was expensive, but a lot less than the other heat treatment provider we interviewed--and unlike the other provider, the estimate was free.”

I just wanted to say that your technician, Jason (I don't know his last name) came to my apartment this morning to look at a fly issue and he was extremely professional, wore all the proper PPE, and did a thorough inspection of my home. I'm an entomologist at the National Pest Management Association (I have a PhD in urban entomology and train the pest control industry-- so I can vouch for the technician's knowledge and professionalism).I'm grateful for Jason and all of the PMPs out there working hard during these difficult times so please let Jason's supervisor know he did a great job and gave excellent customer service.

When I learned that my elderly Uncle had a heavy infestation of bedbugs, I began looking for solutions. I tried several contractors, but one stood out from the others. My situation was very unique, as I live 250 miles away from my Uncle, and cannot be there all the time. It was such a relief to find Eagle Pest, as they coordinated everything for me. From initial contact, all the way through to a very challenging heat treatment and follow up visits, they were fantastic. I had total peace of mind in dealing with the Eagle Pest team, and am very happy to report that my Uncle is rid of bed bugs and back into a healthy way of life. Thank you so much, Eagle Pest, you folks are the best. A definite 5-Star rating in my book.

“Bye Bye Ants :)) love this company. I switched from another company and I am so happy that I did :) they are very knowledgeable and the employees are so friendly!!!!”

“Outside pest spray. They were on time, explained what they were going to do & what was needed in the future. After she had examined the exterior, decided what was needed, she did it with no delay.”